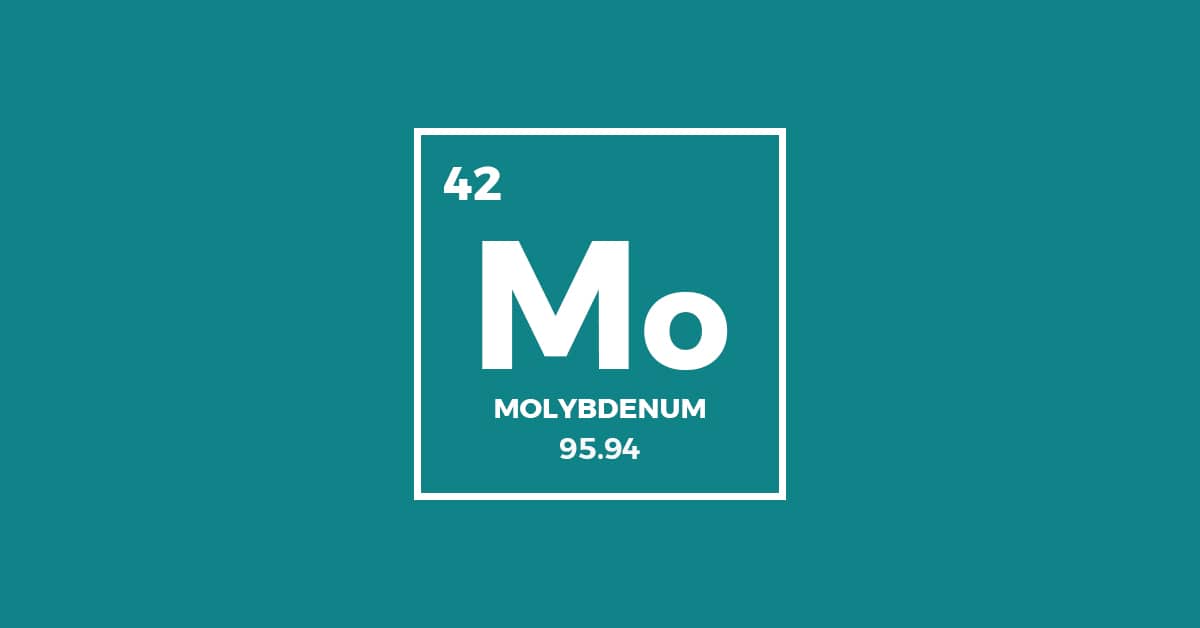 Here’s one nutrient you’ve probably never heard of. Molybdenum has a history of being misunderstood. In the early days of its use, it was often confused for graphite and it was believed to contain lead. Both of these assumptions are, of course, wrong, but molybdenum is stuck with its name as a souvenir. Molybdenum is derived from the Greek word ‘molybdos’, which means ‘lead’.

One thing that should be clear about molybdenum is that it’s essential for your health. Let’s see why.

Molybdenum is an essential trace element. As such, it’s indispensable for the normal functioning of your body, though you only need it in very small amounts.

In your body, molybdenum is mostly found in the liver, kidneys, glands and bones.

Due to its involvement in chemical reactions related to carbon, nitrogen and sulphur, molybdenum is not only important for human health, but also for the health of the ecosystem around us.

Molybdenum’s main function in your body is to assist the activity of several enzymes. These enzymes are involved in numerous processes within the body.The molybdenum-dependent enzymes are sulphite oxidase, xanthine oxidase, aldehyde oxidase and mitochondrial amidoxime reducing component (mARC1). MARC1 was only recently discovered. Its function in the body is still under investigation.

Molybdenum is crucial for:

In regions of China that are known for their residents’ longevity, the concentration of people aged over 90 is positively correlated with the level of trace elements such as molybdenum in the soil and drinking water.

However, there is no evidence of a causal relationship and studies have been focused on a mixture of trace elements, rather than molybdenum alone. Therefore, it’s still unclear whether molybdenum can improve your chances of living a long life.

Molybdenum increases the hardness and temperature resistance of steel alloys. So much so that in World Wars I and II it was used to make the infamous ‘Big Bertha’: the Germans’ super-heavy howitzer. The heat produced by a single Bertha shot was enough to melt traditional steel.

How much molybdenum do you need?

Healthy adults need 65 mcg of molybdenum per day.This is the adequate intake (AI) established by the European Food Safety Authority (EFSA). Think of it as one cup of soybeans.

The best foods for getting your daily molybdenum are beans, lentils, peas and legumes. Grain products and nuts can also be good sources of molybdenum.

Fruits and vegetables are generally poor in molybdenum, although this depends on its concentration in the soil. If plants grown in low-molybdenum soils are used as animal feed, the molybdenum content of meat and other animal products will also be lower as a result.

Drinking your daily amount of about 2 litres of water with an average molybdenum concentration of 30 mcg/litre can almost cover your daily needs. That makes water a viable source of molybdenum in your diet.

The best food sources of molybdenum are:

* Based on the adequate intake (AI) for healthy adults (65 mcg/day) according to the European Food Safety Authority (EFSA).

What if you’re not getting enough molybdenum?

Molybdenum deficiency due to low dietary intake has never been observed. There are some documented cases of molybdenum deficiency following long-term parenteral nutritionParenteral nutrition is a method of intravenous feeding used for people who are unable to get their nutrients by oral ingestion or cannot absorb them in the gastrointestinal tract. that did not contain molybdenum.

If it does occur, molybdenum deficiency causes rapid heartbeat and respiration, headaches and night blindness. Symptoms can also include skin and eye irritations, as well as kidney damage.

Bad guys beware! Molybdenum disulphide is used for taking fingerprints. In combination with a detergent solution, it sticks to the fatty components of fingerprint residue, forming a grey layer. This method of taking fingerprints can be applied to a variety of surfaces, from plastic to cardboard.

How much molybdenum is too much?

Molybdenum has low toxicity in humans. Only very few cases have been reported – among workers in a molybdenite roasting plant and among inhabitants of Armenian regions, where daily molybdenum consumption reached 10 to 15 mg/day (23,000% of the AI). Such excessive doses of molybdenum can cause high levels of uric acidUric acid is a normal by-product of the breakdown of purines in food. Your kidneys usually filter out uric acid from your blood. If too much accumulated, it can affect the acid-base balance of your blood. in the blood, as well as pain, swelling and tenderness in the joints.

To stay on the safe side, keep your molybdenum consumption under 0.01 mg per kg of body weight. For the average adult, that’s about 0.6 mg/day.This amount reflects the tolerable upper intake level (UL) established by the European Food Safety Authority (EFSA).

If you remember three things about molybdenum, make them these three: