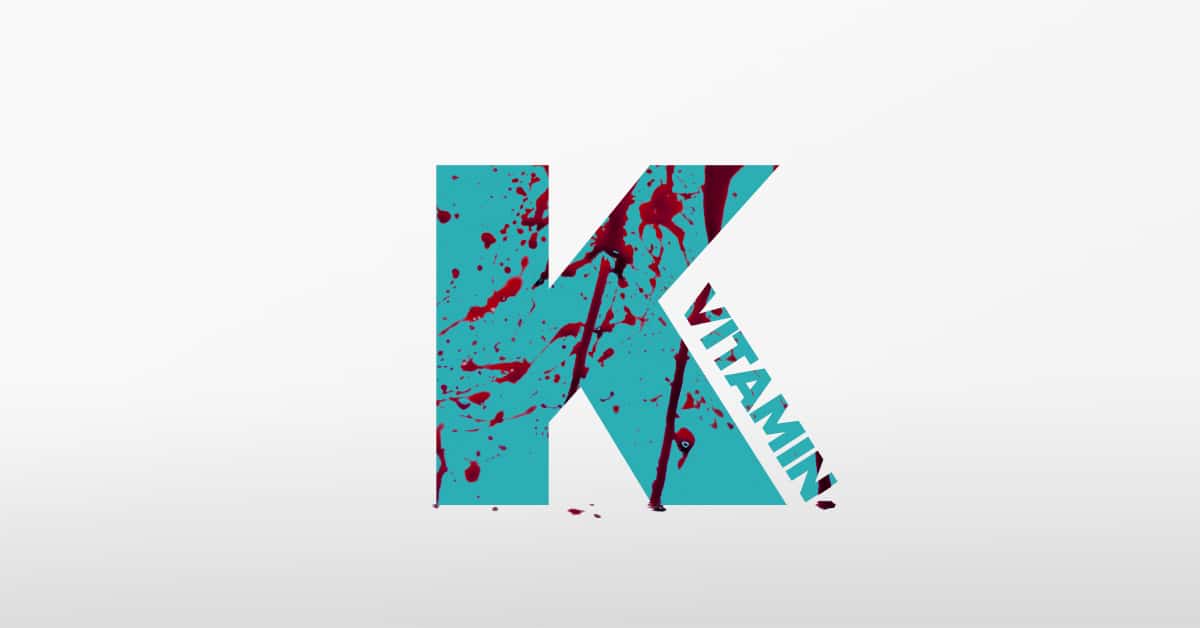 Nothing increases appeal like an air of mystery. And no-one is more specialised in mystery than vitamin K. Sometimes referred to as ‘the forgotten vitamin’, it continues to keep its secrets. Vitamin K is known for the involvement in blood clotting and bone formation.

Let’s review the most important findings about vitamin K so far.

Good to know: Vitamin K1 is absorbed up to twenty times better when consumed in pure form, as a tablet, than when consumed through food.

What is vitamin K?

Vitamin K is a fat-soluble vitamin Vitamins can be fat-soluble and water-soluble. Vitamin K is fat-soluble. This means that it is absorbed with the help of lipids (fats) and is less likely than water-soluble vitamins (like B and C) to leave the body through the kidneys. with two vitamersVitamers are chemical compounds with a similar molecular structure, which fulfil the same function in the body. – K1 and K2, a.k.a. phylloquinone and menaquinone. Both can be found in food. The major difference is that K2 is also produced in the body by gut bacteria.To be exact, there is also a third form of vitamin K, known as K3 or menadione. It is a synthetic type of vitamin K and has been banned by the US Food and Drug Association (FDA) for use in human food, due to its potential toxicity. Small doses that are considered safe continue to be used in some pet foods and livestock feed.Source: U.S. Food & Drug Administration

The role of vitamin K in your body is best summarised as supporting, but vital. Vitamin K acts as a coenzymeEnzymes are substances, mostly proteins, that speed up biochemical reactions within the body. A coenzyme is a substance that helps enzymes do their job.. It partners with proteins and ensures their biological activation – the process which allows them to perform their function in the body.

Most notably, the functions that depend on vitamin K are:

Vitamin K can be applied directly to the skin to help reduce bruising after injury. Ointments with a high concentration of vitamin K (e.g. 5%) are most effective.

How much vitamin K do you need?

Currently, there are insufficient data to determine a recommended dietary allowance (RDA)Recommended Dietary Allowance (RDA) is the average daily intake sufficient to meet the nutritional requirements of 97%-98% of healthy individuals. for vitamin K. However, the European Food Safety Authority (EFSA) has indicated that 70 micrograms per day is an adequate intake (AI)Adequate Intake (AI) is the amount assumed to meet the nutritional requirements of an average healthy individual. It is used when no RDA has been established for a specific nutrient.. Think of it as ten lettuce leaves or 1/8th of a cup filled with spinach.

Both vitamin K1 and K2 function in the same way but are active in different parts of your body. Vitamin K1 dissolves relatively easily and is mostly found in the liver where proteins responsible for blood-clotting are made. Vitamin K2 is more abundant in fatty tissues, as well as bones. It is, therefore, important to ensure that both are present in your diet.

The best food sources of Vitamin K1 are green leafy vegetables and vegetable oils. To a lesser extent, it can also be found in dairy, meat and eggs. These animal sources provide a relatively high amount of vitamin K2, whereas plant sources mostly provide vitamin K1. Vitamin K2 is also abundant in many fermented foods, such as cheese, yoghurt or fermented soybeans (a.k.a. the Japanese “natto” dish).

These are the top sources of vitamin K:

* Based on the adequate intake (AI) established by EFSA.

Vitamin K1 is absorbed significantly better when consumed in pure form (e.g. as a dietary supplement) than when consumed through food. For example, the amount of K1 you absorb from a tablet could be up to twenty times more than that from spinach.
TIP: To improve the absorption rate of K1 from vegetables, consume them together with some fats.

How much vitamin K is too much?

Overconsumption of vitamin K is actually not something to worry about under normal circumstances. There are no known side effects of consuming excessive amounts of either vitamin K1 or K2.

Despite being nicknamed ‘the forgotten vitamin’, don’t forget about vitamin K. Or at least try and remember these few things:

Questions? Do let us know.