Vitamin B3: The Complex Vitamin 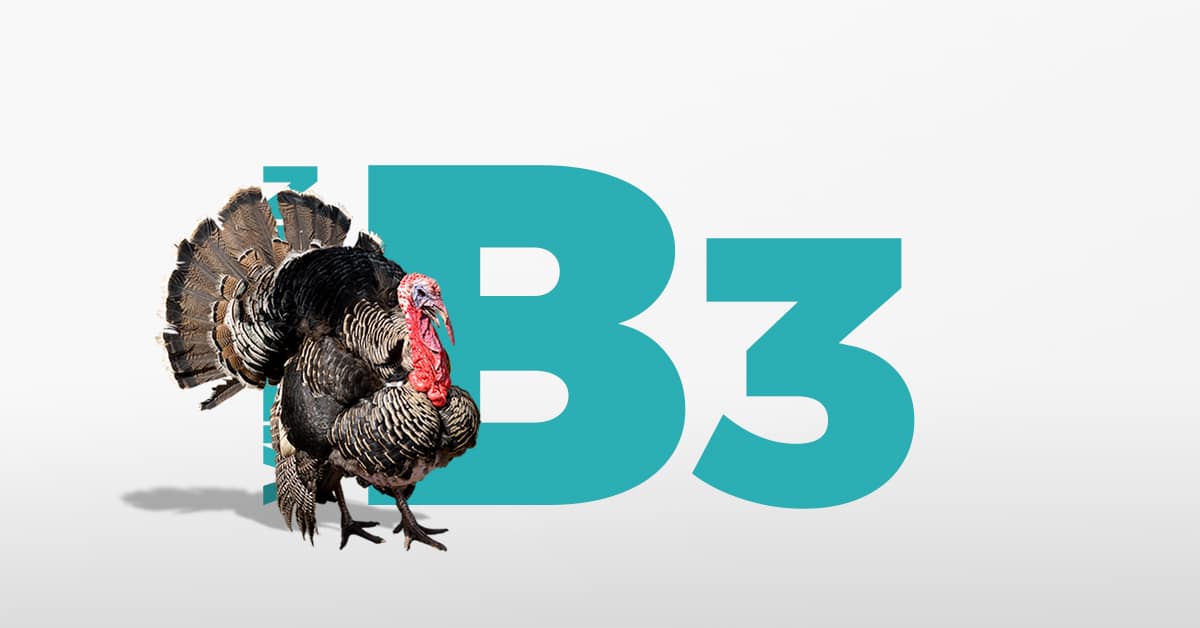 Part of the vitamin B complex and with three different forms of its own, vitamin B3 is something of a complex within a complex. It plays a key role in energy production and transportation within the body. Let’s take a closer look at vitamin B3.

Best known for: Converting nutrients into energy, maintaining healthy skin and for maintaining normal structure and function of the mucous membranes.

Good sources: Meat, fish, nuts and wholegrains. Protein-rich foods like spinach, eggs and seaweed can also stimulate vitamin B3 production in the body.

Good to know: A third form of vitamin B3, nicotinamide riboside, was identified in 2004.

What is vitamin B3?

Vitamin B3 is a water-soluble vitaminVitamins can be water-soluble and fat-soluble. Vitamin B3 is water-soluble, which means that it dissolves in water and cannot be stored in the body. Amounts consumed in excess leave the body through the kidneys.. It is sometimes referred to as vitamin B3 complex, because it consists of three vitamersVitamers are chemical compounds with a similar molecular structure, which fulfil the same function in the body. – niacin, nicotinamide and nicotinamide riboside. All three have the same functions in the body, but there are small differences.

The molecular structure of nicotinamide is more stable than that of niacin. It is also considered of lower toxicity, as it does not cause some of the side effects associated with niacin intake (e.g. skin flushing).

The third vitamer of vitamin B, nicotinamide riboside, was only identified as such in 2004 and is less well-researched than the other two.

The form of vitamin B3 generally used in dietary supplements is nicotinamide.

Vitamin B3’s original name was nicotinic acid. It was often mistaken for nicotine, eventually making a name change necessary. The event that triggered the name change happened in 1942. Misinterpreting a government report, US newspapers announced that bread contains tobacco. What should have been reported instead was the actual news – the government was now enriching flour with nicotinic acid to ensure citizens get enough vitamin B3.

Health benefits of vitamin B3

Vitamin B3 has a beneficial effect on normal energy-yielding metabolism. Energy metabolism is the process of converting nutrients from food into energy for the body.. Whether you ingest it in the form of niacin or nicotinamide, vitamin B3 is converted into nicotinamide adenine dinucleotide (NAD). NAD is responsible for the cellular respiration processes of all living cells, enabling the proper conversion of nutrients into energy.

The key functions of vitamin B3 are:

Vitamin B3 can be applied to skin to reduce the severity of acne.Source: International Journal of Dermatology. Best results are observed on oily skin types.

How much vitamin B3 do you need?

Healthy adults require 6.6 mg of vitamin B3 per 1000 kcal of energy consumed. In other words, for someone with an average diet consisting of 2000 kcal, the recommended daily intake of vitamin B3 would be 13.2 mg.These amounts reflect the recommended dietary allowance (RDA) set by the European Food Safety Authority (EFSA). Covering your daily needs for vitamin B3 can be as easy as having a piece of tuna with a side of potatoes.

Vitamin B3 in foods

The highest amounts of vitamin B3 can be found in meat, fish, nuts and whole grains. However, vegetables and potatoes are also good sources of vitamin B3.

Here are the best sources of vitamin B3:

* Based on the recommended dietary allowance (RDA) established by EFSA for healthy adults with an average diet containing 2000 kCal daily (13.2 milligrams of vitamin B3/day).

Vitamin B3 can also be produced in the body from tryptophanTryptophan is an amino acid present in protein-rich foods..Therefore, an alternative route to meeting your daily needs of vitamin B3 is to include foods such as game meat, eggs, spinach or seaweed in your diet, as these are among the best sources of tryptophan.

What if you’re not getting enough vitamin B3?

Vitamin B3 deficiency is uncommon but still occurs all over the globe. It is associated with factors such as poverty, malnutrition and alcoholism.

Mild deficiencies slow metabolism and cause a decreased tolerance to cold. More serious forms of deficiency can cause psychiatric symptoms, including poor concentration, irritability, anxiety and depression.

The most severe consequence of vitamin B3 deficiency is pellagra. Pellagra is characterized by diarrhea, dermatitis and dementia.

How much vitamin B3 is too much?

Under normal circumstances, excess amounts of vitamin B3 consumed from food are excreted from the body through the kidneys. However, vitamin B3 (nicotinamide) from dietary supplements can result in toxic overconsumption. Large doses of nicotinamide can increase the blood sugar level, cause liver damage, skin rashes and contribute to the development of peptic ulcersPeptic ulcers are open sores on the inside lining of the stomach and the upper portion of the small intestine..

The three key things to remember about vitamin B3 are: