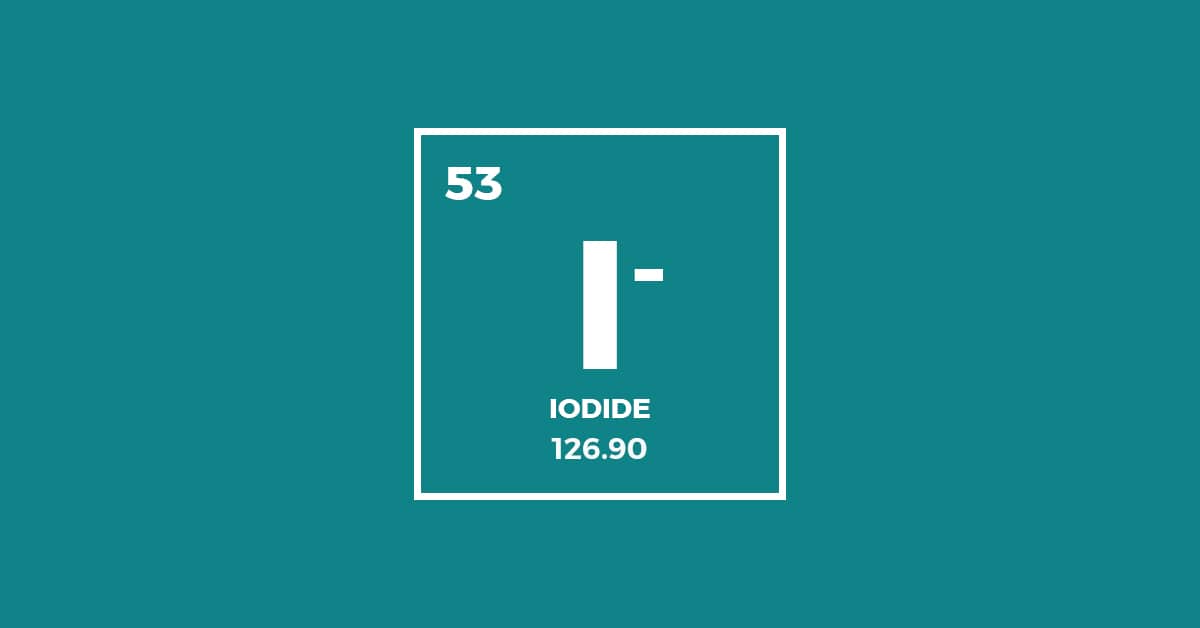 Iodine is the heaviest of all nutrients and yet, it’s the only one you could find in a cloud. It’s true – if you spray iodine in the atmosphere and there’s sufficient moisture in the air, you can quite literally make it rain. And if that’s not impressive enough, iodine is also a key factor in keeping you in shape – from your body temperature to your brain. Let’s get to know iodine better.

Good to know: The amount of iodine in fruits and vegetables is highly dependent on the iodine content of the soil where they were grown. Therefore, people living in regions with iodine-poor soil can be at a higher risk of iodine deficiency.

Iodine is a trace element. This means that your body needs a very small quantity of it. However, that small quantity is still very important. Not getting enough iodine would affect key bodily functions.

On average, an adult has 15-20mg of iodine in their body. Close to 80% of it is found in your thyroid, a gland in your neck where many hormones are produced. The rest is in the blood, muscles and ovaries, if you have them.

Iodine is sometimes referred to as iodide. The two are different chemical forms of the same element and can both be found in food.

Iodine has many functions in our body. Most prominently, it’s essential for the synthesis of thyroid hormones, which are critical for growth and metabolism.

The key functions of iodine are:

If you’re iodine deficient, you’re more vulnerable to the effects of a nuclear disaster. When these happen, radioactive iodine is released into the environment. If your body is low on iodine, it increases iodine absorption rate into the thyroid. Under normal circumstances, this would be helpful. Less so when the available iodine is radioactive.

How much iodine do you need?

One of the best sources of iodine is seaweed. It has an admirable ability to accumulate and concentrate iodine from seawater. Some types of seaweed can reach iodine concentrations up to 30,000 times the amount available in the water around them.

Next to seaweed, other good sources of iodine are dairy products, grains and eggs. When it comes to fruits and vegetables, their iodine content is highly dependent on the iodine content of the soil where the vegetables are grown. Plants grown on iodine-poor soil and used in animal feed can lead to low iodine content of meat as well.

To avoid the risk of iodine deficiency, more than 70 countries globally have introduced salt iodisation programs. This means that table salt is fortified with iodine.

The best sources of iodine are:

* Based on the adequate intake (AI) for healthy adult men (150 mcg/day) according to the European Food Safety Authority (EFSA).

When the US introduced salt iodisation in 1924, the country’s IQ was raised by 15 points as a result! However, this effect was mostly observed in people with iodine deficiency. If you’re not deficient, increasing your iodine intake won’t do much for your IQ.

What if you’re not getting enough iodine?

Iodine deficiency is a serious issue worldwide. 38% of global population lives in areas with poor iodine availability such as mountain areas and river valleys prone to flooding.

Even mild iodine deficiency in children can affect neurological development and is associated with lower-than-average intelligence, as measured by IQ.

In adults, mild to moderate deficiency can hinder mental function and productivity. Iodine intakes lower than 10-20mcg per day can lead to hypothyroidism, which is usually accompanied by goitre. Goitre is an enlargement of your thyroid gland resulting in a visible swelling in the neck. It is especially dangerous for pregnant women, as it can cause miscarriage, as well as retardation of the baby.

Groups at a higher risk of iodine deficiency are:

Some foods, including soy, cassava, cabbage, broccoli and cauliflower, contain substances that interfere with the uptake of iodine in the thyroid gland. If you are not getting enough iodine in your diet, you should stay away from these foods to avoid further limiting your intake.

How much iodine is too much?

Most Western diets are highly unlikely to provide a dangerously high amount of iodine. However, if you’re a fan of Asian cuisine, be careful with certain types of seaweed, like Kombu. Just 9 grams of Kombu contains 160 times the recommended daily amount of iodine. The safest and most common type of seaweed is Nori, which is used in sushi. Another type of seaweed, Wakame, is also considered safe in moderate quantities, though you should avoid eating more than 10-12g of Wakame per day.

If you’re consuming a lot of iodine over time, the symptoms you’ll experience are similar to those of deficiency. For example, excessive iodine intake can also result in goitre. Additional side effects include hyperthyroidismHyperthyroidism is a condition in which your thyroid gland is overly active, leading to accelerated metabolism, sudden weight loss and an irregular heartbeat., thyroiditisThyroiditis is an inflammation of the thyroid gland. and thyroid cancer.

An extreme dose of 2-3g (>13.000 times the AI) of iodine is considered lethal and has been used as a means of suicide.

To stay on the safe side, limit your iodine intake to 600 micrograms per day.This is the tolerable upper intake level (UL) established by the European Food Safety Authority (EFSA).

These are the three things to remember about iodine: