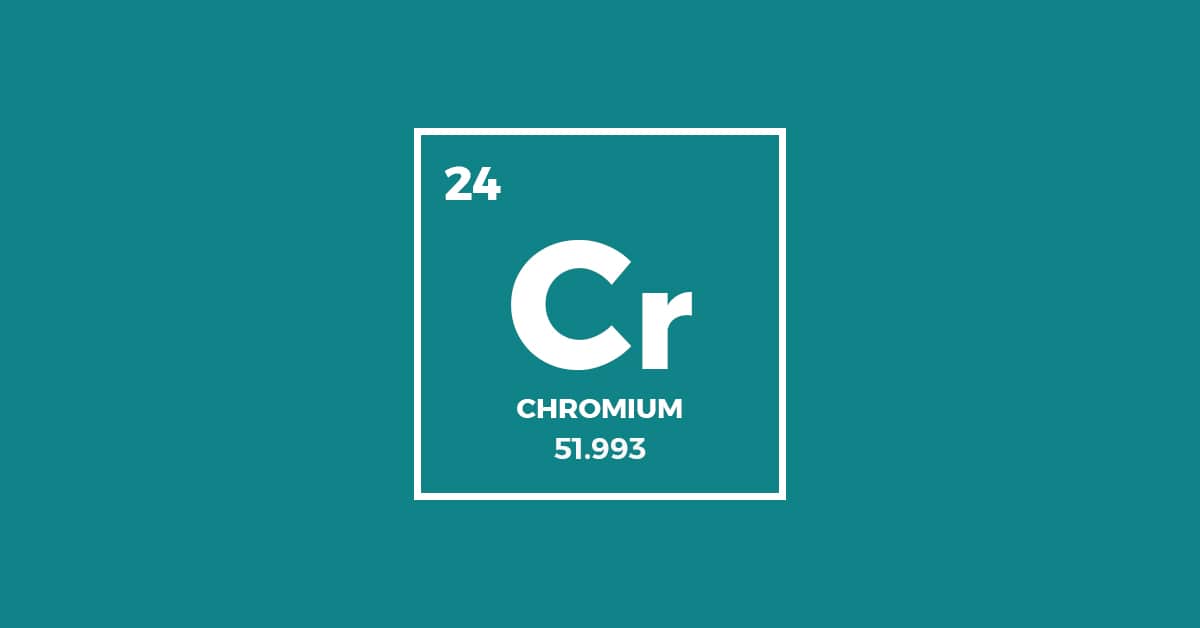 Have you ever been stopped in your tracks by the flawless shine of 20-inch chrome rims? That’s chromium you’re admiring. And it’s not just pretty. Widely used in coatings and pigments, chromium is an element of many trades. One of them is keeping you healthy. Here’s what you need to know about chromium.

Best known for: Enhancing the metabolism and storage of macronutrients in your body.

Good sources: Meat and whole-grain products are the best sources. Also found in some fruits, vegetables and spices.

Best kept secret: Probably more than one. Chromium’s function in the body is not yet fully understood.

Chromium is a trace element. This means that your body only needs a small amount of it to function. Unlike most other trace elements, chromium and its functions in the body are not fully understood yet.

The chromium in your body is mostly found in your liver, spleen, soft tissue and bones.

The full spectrum of chromium’s functions is still being investigated. What we already know is that it enhances the activity of insulin. Insulin is a hormone critical to the metabolism and storage of macronutrients in the body. Next to that, chromium seems to have a more direct involvement in energy metabolism, although the exact mechanisms are not fully understood at this point.

Chromium has sometimes been credited with a role in reducing body fat and increasing lean muscle mass. However, there is little justification for such claims. The majority of studies on the topic have been small-scale, showing modest results at best.

How much chromium do you need?

The amount of chromium needed for optimal health is not a straightforward topic. Due to insufficient data, the European Food Safety Authority (EFSA) has recently questioned whether chromium is indeed an essential trace mineral and it has chosen not to establish an adequate intake (AI) at all at this point.

At the same time, the US Institute of Medicine advises an AI of 35 micrograms chromium per day for healthy adult men and 25 micrograms per day for women. That’s a bit over a litre of grape juice.

Chromium is available in a wide variety of foods, though mostly in small amounts. Relatively good sources of chromium are meat and whole-grain products, as well as some fruits, vegetables and spices.

The best sources of chromium are:

* Based on the adequate intake (AI) for healthy adult men (35 mcg/day) according to the US Institute of Medicine.

Chromium’s absorption rate is generally low, ranging between 0.4% and 2.5% of the consumed amount. Some nutrients, including vitamin C and vitamin B3 can enhance chromium absorption rate.

Depending on its oxidation state, chromium can serve as a yellow, orange, green, purple or black pigment. That’s actually how it got its name, too – ‘chromium’ derives from the Greek word for ‘colour’.

What if you’re not getting enough chromium?

How much chromium is too much?

Currently, there are insufficient data to establish a tolerable upper intake level (UL) for chromium.

Based on the evidence at hand, intakes up to 1 mg chromium/day (close to 3000% of the AI) are unlikely to cause adverse health effects. It would also be quite unusual to reach such a high dietary intake of chromium. The average chromium intake in European countries ranges from 61-160 micrograms/day.

Therefore, unless you use too much supplementation, you shouldn’t worry about potential chromium toxicity.

If you remember three things about chromium, these are a good choice: